According to a recent book I read called the Yellow House Van Gogh’s official diagnosis was melancholy.  This was probably what we now call depression or maybe even anxiety. Furthermore, it’s pretty common knowledge that when he was having an “episode” he struggled to work. He would instead drink and bother his neighbors, brother, and friends with frantic ideas. Even with thoughts streaming all through his body focus became difficult when he did not feel good. This summer I have felt akin to Van Gogh’s struggles.

On a hopeful drive to Cape Cod in early June where Jared and I anticipated spending a week in between classes my Doctor called me on my cell phone. A first. I was 22 weeks pregnant and many of our friends and family still did not even know. The baby was too small. Words floated above us as she spoke: termination, genetic testing, amniocentesis, high risk, prepare yourself prepare yourself prepare yourself. She said to expect a call later with more information then we hung up. We  got off at the next exit and just sat in the car parked at the halfway point between home and my parents.  We bounced back and forth between what would be worse; family at the beach or spending the next couple of days alone and anxious in an already sweltering Philadelphia? I made the first of many uncertain decisions and continued north forbidding my niece and nephew to be present or Jared to have any alcohol. For two days we researched and cried and talked to the doctor repeatedly. The result was an upgrade to high risk status, lots of tests, and waiting. We spent the next two days at the cape and drove home on a Monday for our first appointment post downfall as this period became known. After all the poking, prodding, questioning and clarifying the baby and I were diagnosed with an  intrauterine Growth Restriction or IUGR. Then I took more tests and talked to more doctors and was told to wait. This is when I started having my own episodes. I did not drink or bother friends, instead I stared at a wall or out of a window and tried to understand for hours in silence. After a week of isolation I started my first failed project.

I thought if I just do something I will feel better. Jared and I drove to A.C. Moore and I bought material for needlepoint. I drew a Godzilla and tried to thread a needle. I lasted about an hour. After the first thread ran out Jared caught me staring. Thinking the worst or trying to imagine the outcome. As I went back to work, I started to write everything down. What they said at the hospital, discrepancies with different doctors, and notes I read about online. This led me to my second failure. I sat outside for hours and made dots with a marker. It would only sometimes pass the time. I could see Jared growing frustrated with not knowing how to help me. Thankfully, soon my mom came. More results, still small, more waiting. She suggested wood cuts. Back to the store. Carving tools, ink, paper, and wood. While she sat next to me I could work for hours until my hands bled. When she left more episodes. More waiting. No woodcuts.

I have continued writing and what became helpful is re-reading what I wrote all summer and how far I have come. Then, without any thinking or planning I began making actual art. Distracted for hours by paint and pencil. Still in process the drawings are based on all the recent doctors I have met.  A blur of faces in a grid that are sad and funny. On the Fourth attempt in almost the fourth month trying and art are not so hand in hand and I am beginning to feel like myself again.

Meanwhile, Summer is finally ending and we are ready for the future.  The three of us. We are now at 33 weeks and she is still small and we are still waiting.

I am still staring, but now I am starting to see. 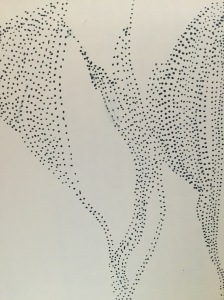 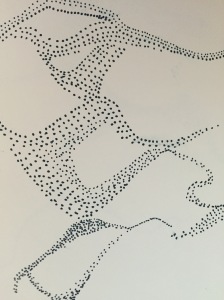 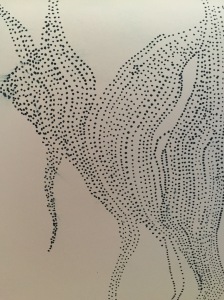 One thought on “The Summer of Darkness: Trying to Make Art During a Troubled Pregnancy”